Hello everyone, I hope you are all well 🙂

Today for the first time ever, I am doing a guest post. So grab a cup of coffee (or a yummy drink of your choice) and sit with us while we host the wonderful author Bridget Nash, author of Players.

Where do story ideas come from?

The easy answer is human imagination. Humans have been telling stories for as long as there have been humans. Sometimes I like to think that storytelling around a campfire started out as a game called “Who Can Tell the Best Lie?”

Players was my first completed novel since I was in the eighth grade. That eight-grade manuscript is still laying around somewhere, probably in a box in my parents’ basement, and I hope if anyone ever discovers it, they don’t know I wrote it.

I started a great number of novels over the decade between Meet the Jacobsons (yes, it was really called that) and Players. Some were fantasy, some were adventure, some were coming-of-age. All of them died a few chapters in.

The idea for Players rolled around in my brain for quite a while before I actually put pen to paper. That’s literally speaking, by the way. I wrote the entire first draft of Players by hand. The first little bud in my mind was fed by my obsession with Elizabethan players. I loved the idea of traveling bands of players, rolling in rickety wagons filled with costumes and makeup. It seemed magical how they must have stopped to camp for the night, maybe in between villages, built a fire and rehearsed scenes. I wondered what the villagers thought as the traveling players rolled into town. Was there disdain and secret wonder? Did mothers tell their children to stay away from them? Maybe small children peeked from behind their mothers’ dusty skirts as the caravan rolled by, enchanted by the mystique.

I probably have it all wrong, but players from the time of Shakespeare captured my imagination and wouldn’t leave.

I wanted to write about traveling players but the problem was I didn’t want to write a period piece. My brain wouldn’t let it go, though. So, lying in bed at night, I would play around with the construction of a modern world with traveling players. I know there are theater groups that travel, but I wanted players in wagons, spending dark nights around blazing fires, going through life with an air of mystery.

I don’t remember when exactly I landed on dystopia. I love a good dystopia although I had read only a couple at that time in my life. I didn’t realize there were so many lovers of dystopia out there or so many dystopian stories!

I think people like dystopia so much because we fear oppression. Whatever side of the political spectrum someone is on, oppression is this looming possibility, even if we disagree on how it might come about. Dystopian stories allow us to explore that fear and then close the book, tyranny captive between the covers.

The dystopian world of Players isn’t blatant. In fact, most citizens live with the belief that they are in a utopia. That’s how oppression happens in my mind. It isn’t some dictator who swoops in and starts making edicts. Oppression can inch in so slowly that people don’t realize it’s there until there’s no easy road back.

I seem to have digressed. I made a dystopia to create a world in which traveling players of the Elizabethan sort could exist in all their mysterious glory.

If I’d had a smartphone, I probably would have just played Words With Friends instead of starting to write a novel while I waited for the board members to come back into the boardroom. I didn’t have a smartphone and the boardroom had quickly become the bored room. So I wrote what was then the first line of the story: It wasn’t that his life was boring. It was that it was so boring he thought he might die.

That is no longer the first line of the book but it is the initial sentiment of the protagonist Ryan’s view on his utopian life. I honestly don’t know if the story would have started the same way if I hadn’t started it in a moment of sheer boredom. But I can say that if it didn’t start that way, it may have become a completely different story. I don’t outline when I write novels. I tend to know the basic plot, and usually the end before I start, but I like to see where the characters take me. And if you’ve ever written fiction, you know that characters tend to have free will and the writer just kind of nudges them. Some writers nudge them a lot harder than others. Everyone has a different method.

Players lived in various notebooks, traveling around with me in life, for quite a long time. It was mostly scrawled late at night by the light of my bedside lamp. When I finally finished it, it sat. The handwritten manuscript was in a small suitcase I’d found at a garage sale in the corner of my bedroom. Eventually, I felt sorry for it. Mostly because my handwriting is completely illegible and there was no point of getting the story out of my head if no one but me could read it.

I typed out the manuscript and finished it, the second draft, several years after I’d started the first draft. It’s not finished though. The world of Players is still very much alive in my mind and, some people will be pleased to know, a sequel to it is my next project. I’ve already started, but I seem to have misplaced the notebook…

Players is Bridget’s first novel but ever since she could hold a pencil, she has enjoyed writing as a recreational activity. As a child and a teen, she could often be found outdoors with a notebook and pen, listening to the birds and the wind while making up her own worlds on paper.

When she isn’t writing or taking photographs, Bridget enjoys reading and watching sitcoms simultaneously. Her favorite books are Frankenstein, Jane Eyre and A Ring of Endless Light. Bridget lives in a very small Oklahoma town, along with her husband; her daughter; two dogs, Trevor and Penny; a border collie named Taban; a cat named Taylor Swift; and a fancy rat named Sheldon.

About The Book – Players 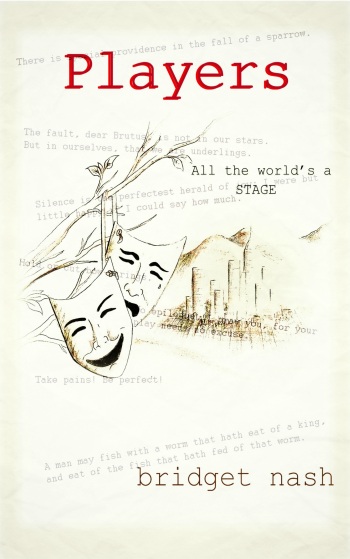 Ryan Scribe is eighteen and has it made.
He lacks nothing and doesn’t even know anyone who lacks anything.
Then he hears a beautiful actress say, “Truth is often stranger than perception,” and he begins to look at his world with new eyes.
All it takes is one wrong question and he is swiftly banished from the only home he’s ever known. Forced to join a band of traveling players, stage actors who look like they could have stepped straight out of Elizabethan England, Ryan begins to question his life, his country and everyone around him. Can he really trust a group of actors? Will his questions land him in even more danger?

As always, thank you so much for reading ❤

13 thoughts on “Guest Post: Where Do Story Ideas Come From? By Bridget Nash”

New video is up on my channel, link in bio. I did another Collage Challenge by Margarete Miller's and I made so many mistakes but I do love how it turned up 🥰❤️
My Tweets